Music of the Spheres

The Music of the Spheres was the theory of an ethereal harmony thought by the philosopher-mathematician Pythagoras to be produced by the spinning of the celestial spheres. The universe remaining in balance was a reflection of the harmony of these vibrations – as were musicians adding to this harmony. In the 16th century, the mathematician and astronomer Johannes Kepler made a more scientific and mathematical argument for a music of the spheres, assigning musical intervals to each planet’s orbit.

These theories were taught in universities as part of the ‘Quadrivium’ – a group of studies consisting of arithmetic, music, geometry, and astronomy. Study of these subjects enabled the ‘The Age of Discovery’ – the extensive overseas exploration which spanned the Renaissance and Baroque periods and drove the globalisation of European culture. However, cultural exchange is never simply in one direction and European culture also absorbed dances and rhythms from overseas.

This special concert will reflect the meeting of musical and scientific worlds with music from The Age of Discovery from South America and West Africa, and from European composers Galileo, Praetorius, Farnaby, Dowland, Lassus, and others.

Please Note: Tickets are €5 for adults, children are free.  Tickets also at door. 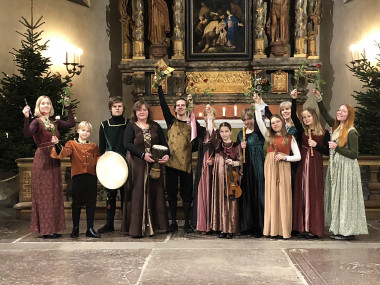